An upcoming charity exposition with a cause will be physically opened on 31 January 2020 at the Community center Chitalishte “Hristo Botev” – Bojurishte.

Here you may preview the artworks, learn more about our cause and follow and support our action.

Our cause is to support the initiative of Association “For Children-2017” and her project “The complex rehabilitation, integration and professional work with children with disabilities.”

The aim of Association “For Children-2017” is to create the suitable environment for the full development of each child with disabilities, providing the proper conditions for their individual development, according to the individual needs, helping the families of each child to overcome social exclusion, through its successful adaptation and inclusion in social life, as well as supporting the social integration and personal realization of each child, which will lead to an improvement in the quality of life of the child and his family.

More about Association “For Children-2017” visit the web site https://www.forkids2017.org/

In our municipality of “Bojurishte” we have a unique example for collaboration between the municipalities and NGO such as the Association “For Children-2017”, founded by the parents of special child and supported by many good friends, neighbors and citizens, people from everywhere who care for the need and future of the most fragile and the most stronger children. There are many special, precious children in our municipalities who are appreciated by the rest of their friends and classmates.

On May 18, 2018, the contract was signed between the municipality “Bojurishte” and the Association “For Children-2017” establishing the free right of use for ten years over a plot of land located in the city of Bojurishte, an area of ​​9805 square meters and a building with an area of ​​1880 square meters. The purpose of the permit is the construction of “Center for social rehabilitation and social integration of children with disabilities / Day Care Center for Children with Disabilities.

Twenty-eight visual poems and fables related with philosophy and literature, are available for collectors and supporters, works selected from Boris’s last two expositions “The Wall” (Gallery “Lik”, Sofia) and “Tetrada” (Gallery “Bulgaria”), 2018, signed and framed, executed in techniques of engravings on paper (pyrography on paper).

The artworks contemplate visually over the philosophy of Hegel (‘Topological |in| Hegel), the literature and philosophy of Jonathan Swift (Gulliver’s Travels), the fractal novel of James Joyce (‘Finnegans Wake’), the poems of T.S. Eliot, the painting and writing of Asger Jorn (‘Open Creation and Its Enemies’), and contemporary “The Black Swan: The Impact of the Highly Improbable”, “Antifragile: Things That Gain From Disorder”, “Skin in the Game: Hidden Asymmetries in Daily Life” by Nassim Nicholas Taleb, with an emphasis on philosophy of money following Pierre Klossowski (‘Living Currency’) and Jean-François Lyotard (‘Libidinal Economy’), the phenomenology of money and ethics presented in the so called crypto renaissance, blockchain and crypto currency, under the slogan “Art is Currency Itself. Ethics is currency itself”.

Boris is one of the founders of “Digital Bojurishte” Local Citizens Initiative.

The artist Borislav Dimitrov is also an independent research with PhD thesis “Topological (in) Hegel”, working in the area of topological philosophy and philosophical topology. Boris believe that philosophy shall be philosophy lived and practiced everyday as authenticity, authenticity of live. The visual rehabilitation of fables offered by Boris emphasize on both medical means of art therapy and the meaning of habilitation in academia. Nowadays the true philosophy is created outside of academic institution, true philosophers, lawyers and artist as well. Who needs rehabilitation@ is the rhetorical question of this event. 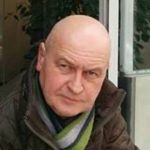